Why I have mixed feelings about slogan tshirts!

I love a Slogan Tshirt, and yes I own a couple, but beware of the message you convey and why some people are Slogan Haters!

With the shops bursting at the seems with slogan wear it’s no wonder everyone is wearing one, adults and children alike are all loving this latest trend and they are so hot right now. This season, we’ve seen street flavour and sportswear styling all over which is why I’m loving wearing my logo t-shirts for a laidback look, but purely in the spirit of fun! 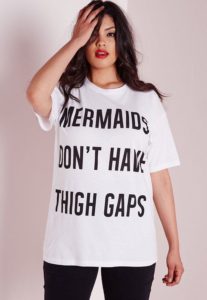 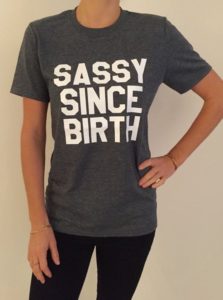 This is a trend that you can rock all year round, top it off with skinny jeans and trainers for easy day time styling or with a leather skirt and denim cut offs and high heels for a feminine take on the statement tee.

Here’s a word to the wise though, they should just be for fun! This question is we are living in a time when grown women are walking around wearing T-shirts – BY CHOICE – proclaiming that they are “Little Miss Naughty!”, “Little Princess”, “Sweet and tasty” and, of course, the eternally hilarious witticisms upon the acronym FCUK. Can you imagine what this message says to youngsters or your employer?

For now, the trend among slogan T-shirts – and it pains me to think slogan T-shirts are so popular that there are actually trends among them – is not for a woman to proclaim how cute and cuddly and sexy they are, but for men to use them to make banter-laden jokes.

And then sometimes, just sometimes, a man will decide to don a T-shirt bearing a slogan one can only describe as “rapey.” “I swear officer, she was awake” is actually one of the more mild ones I have encountered – Unbelievable! I have also seen men – normal-looking men – wearing T-shirts splashed with the following: “It won’t suck itself” (I can actually hear my husband laughing at this one) “Keep calm and rape a lot”; “Yes means yes and no means yes”; “Scream if you want more”. Guys – Really? It does take all of a lady’s stamina not to throw herself at your feet and cry: “Oh please! Marry me now, my handsome prince! All my life I’ve been waiting for you!”

As for people who put their children in these adult slogan T-shirts, this strikes me as quite disturbing seriously.

Even leaving aside the bizarre message of wanting one’s daughter to marry a prince (seriously, were these people in a coma during the Diana “unpleasantness”? Nobody but a sadist would want their daughter to marry a prince), there really is no excuse for treating one’s child as a billboard. It’s not CPS-worthy, true, but it definitely requires a stern talking to from some kind of uniformed official.

Childrens Clothes do not exist to make people laugh at your children and T-shirts do not exist to advertise the comedy potential of rape. Just because a piece of clothing says it does not make it any more acceptable. So lets be a bit more choosy of our slogans people, and a bit more of the shhhh.